Alpinia officinarum, “Lesser galangal” in English and “Petit galanga” or “Galanga officinal” in French, belongs to the Zingiberaceae botanical family. It is a herb that can be 2 m tall. Native to tropical Asia, its rhizomes have been used as spices in Europe for over 1000 years. Its essential oil is used in cosmetics. The plant is also used as a tea in several countries.

Its rhizome has been traditionally used to treat many ailments that vary according to the region. Among them : inflammation, pain, stomach-ache and cold ; malaria, diabetes, epilepsy, hemorrhoids, general weakness, ring worm, tooth decay… It is mostly used to treat coughing, bronchitis and sore throat.

Among the many constituents of the rhizome are various phytochemicals including a vast number of phenolic compounds, notably diarylheptanoids being considered as the principal active constituents; officinin B, alpinin A , B, C and D, in addition to galangin, kaempferide and kaempferol. 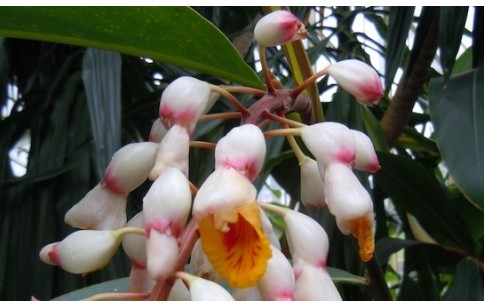