Ruscus aculaetus, “Butcher’s broom” in English and “Fragon petit-houx” in French, belongs to the Asparagaceae botanical family. Native to western and southern Europe, it is a shrub growing to 0.8 m on the outskirts of dry woods and in moist uncultivated ground.

The root was traditionally used in the treatment of jaundice, gout, kidney and bladder stones. Pliny the Elder described its use in treating varicose veins but its medicinal use appears to have been largely forgotten in Europe until the 1970s. It is used today to treat venous insufficiency and hemorrhoids, as a diuretic and mild laxative and in the therapy of cancer and diabetes.

Among its main constituents are steroidal saponins, in highest concentration in the rhizome and root, characterized by spirostanol or furostanol aglycones, in particular ruscogenin and neoruscogenin, but also aculeosides. Also, flavonoids, chrysophanic acid, glycolic acid, phenols and a benzofuran. 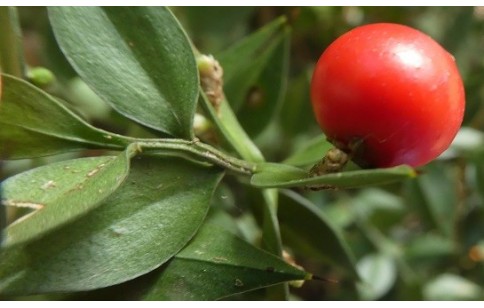