Rhodiola crenulata is a short herb, 5 to 20 cm that belongs to the Crassulaceae botanical family.

It grows in high altitudes of parts of China, Bhutan, Nepal, Sikkim and Ouzbekistan.

Rhodiola crenulata has been used for many years in Eastern traditional medicine for a variety of medicinal purposes and is particularly described in Pharmacopoeia of China.

It has been widely used to prevent acute mountain sickness in the Himalayan areas.

Research showed that the root of Rhodiola crenulata may prove to be an excellent candidate for the treatment of aggressive breast tumors and the prevention of secondary metastases.

Compared with Rhodiola rosea, Rhodiola crenulata was found to contain 2.5 times more salidroside and to lack the presence of rosavines.

The main components of its roots are salidroside, tyrosol, pyrogallol, gallic acid, beta-sitosterol, and crenulatin (1-isopentenyl-3-O-beta-D-glucopyranoside). 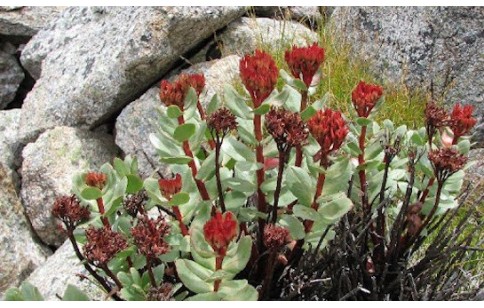