Opuntia ficus indica, “Prickly pear” or “Barbary fig” in English and “Figuier de Barbarie” in French, belongs to the Cactaceae botanical family. Probably native to Mexico, it is cultivated in much of Latin America, South Africa and the Mediterranean, where it grows in dry arid and rocky places.

Its sweet edible fruit is used widely in the food and cosmetic industry and its “leaves” called “cladodes” are consumed as a vegetable. The species is also used as fodder for cattle and planted in hedges to provide effective erosion control.

As a drug, it is used for treating diabetes, burns, bronchial, asthma and indigestion. It has been reported to possess anti-inflammatory, hypoglycemic, and anti-viral activities. 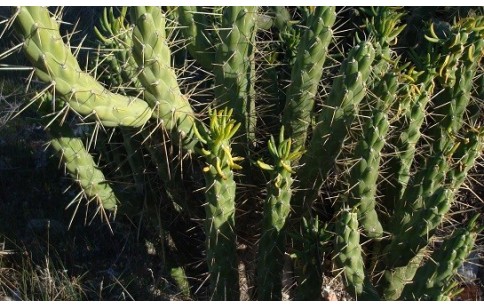