Zingiber zerumbet, “Bitter ginger” or “Shampoo ginger” in English and “Amome sauvage” or “Gingembre shampooing” in French, belongs to the Zingiberaceae botanical family. Native to Asia and widely cultivated in most tropical countries, it is a herb growing to 1.20 m in moist places on lowlands or hill slopes, in thickets and forests.

Its rhizome is used as a spice, as food flavoring and appetizer. Its flower heads extract is widely used to make shampoos and conditioners, softening and bringing shine to the hair.

Traditionally, the rhizome has many different medicinal usages according to the country. It is used for the treatment of inflammation, fever, toothache, indigestion, constipation, diarrhea, dyspepsia, lack of appetite, severe sprains, and to relieve pain, as well as an antispasmodic, antirheumatic, and diuretic agent.

Among the main bioactive compounds of the rhizome essential oil (2,5 to 3 %) are sesquiterpenes, humulene, monoterpenes and zerumbone, in variable quantity according to the origin of the plant. 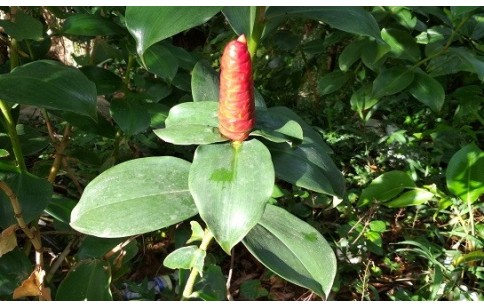